Dr Ludger Hellenthal, managing partner of “H2 Green Power & Logistics GmbH” is currently on tour in Germany with the hydrogen truck “Hyundai Xcient Fuel Cell”. It had already passed eleven cities in seven federal states when it arrived in Schöneberg on the EUREF-Campus on 7 December.

Hellenthal’s company distributes green hydrogen by road, rail, pipeline and inland waterway from its own green electricity generated by photovoltaics, wind power and biomass for H2 electrolysis. Hellenthal: “Despite Corona, we have already reached almost 300 companies at the stops in a few days, both decision-makers and practitioners.” “The company is on its way in the market with a complete ecosystem for green hydrogen in commercial vehicle mobility and later also for large stationary customers. Now the next part of the energy transition is coming to the roads.” After a successful launch in 2020 in Switzerland, Hyundai Hydrogen Mobility AG has announced the market launch of the H2 Hyundai trucks in Germany as well.

When the truck stopped at the EUREF-Campus, Kurt-Christoph von Knobelsdorff, spokesman for the management of NOW GmbH, which works on behalf of the German government, said: “Heavy goods traffic on the road plays a major role in climate protection, as it currently causes around one third of CO2 emissions in the transport sector. Especially for long-distance transport, the hydrogen-powered fuel cell truck is a very promising approach.”

Ludger Hellenthal showed how tolerable the fuel is in a self-experiment and drank a glass of it.

Ludger Hellenthal used his visit to Schöneberg as an opportunity to sign the lease for the EUREF-Campus Düsseldorf, which is currently under construction, with the CEO of EUREF-AG, Reinhard Müller. 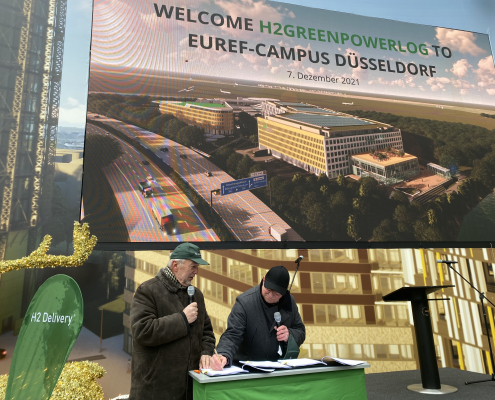 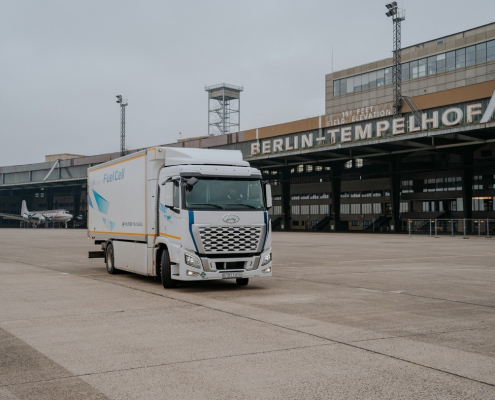 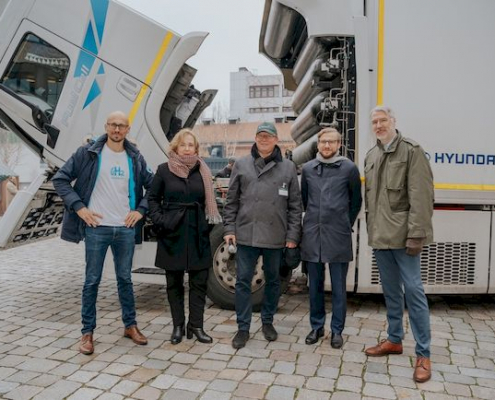 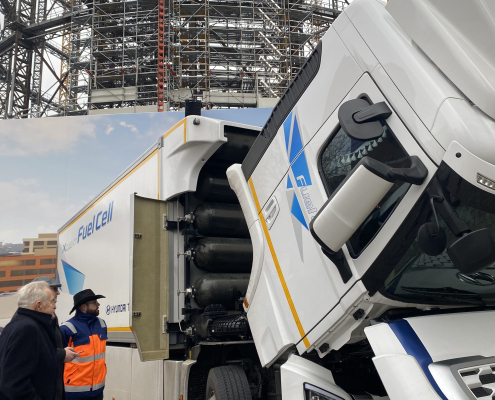 Because these cookies are strictly necessary to deliver the website, refusing them will have impact how our site functions. You always can block or delete cookies by changing your browser settings and force blocking all cookies on this website. But this will always prompt you to accept/refuse cookies when revisiting our site.

We fully respect if you want to refuse cookies but to avoid asking you again and again kindly allow us to store a cookie for that. You are free to opt out any time or opt in for other cookies to get a better experience. If you refuse cookies we will remove all set cookies in our domain.

We provide you with a list of stored cookies on your computer in our domain so you can check what we stored. Due to security reasons we are not able to show or modify cookies from other domains. You can check these in your browser security settings.

These cookies collect information that is used either in aggregate form to help us understand how our website is being used or how effective our marketing campaigns are, or to help us customize our website and application for you in order to enhance your experience.

If you do not want that we track your visit to our site you can disable tracking in your browser here:

We also use different external services like Google Webfonts, Google Maps, and external Video providers. Since these providers may collect personal data like your IP address we allow you to block them here. Please be aware that this might heavily reduce the functionality and appearance of our site. Changes will take effect once you reload the page.

The following cookies are also needed - You can choose if you want to allow them: